Paris meets India – with Chanel’s „Paris-Bombay“ Pre-Fall 2012 Karl Lagerfeld invited to a dinner into the palace of the maharaja of Indore. Since nine years Chanel devotes the show to another city. This year the inspiration was the construction of German architect Eckart Muthesius, built in the 30s. Lagerfeld, who never was in India, says: „Don’t travel to places is much more inspiring than to travel there. It’s the Parisian interpretation of India.“ 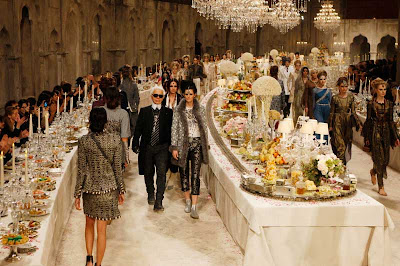